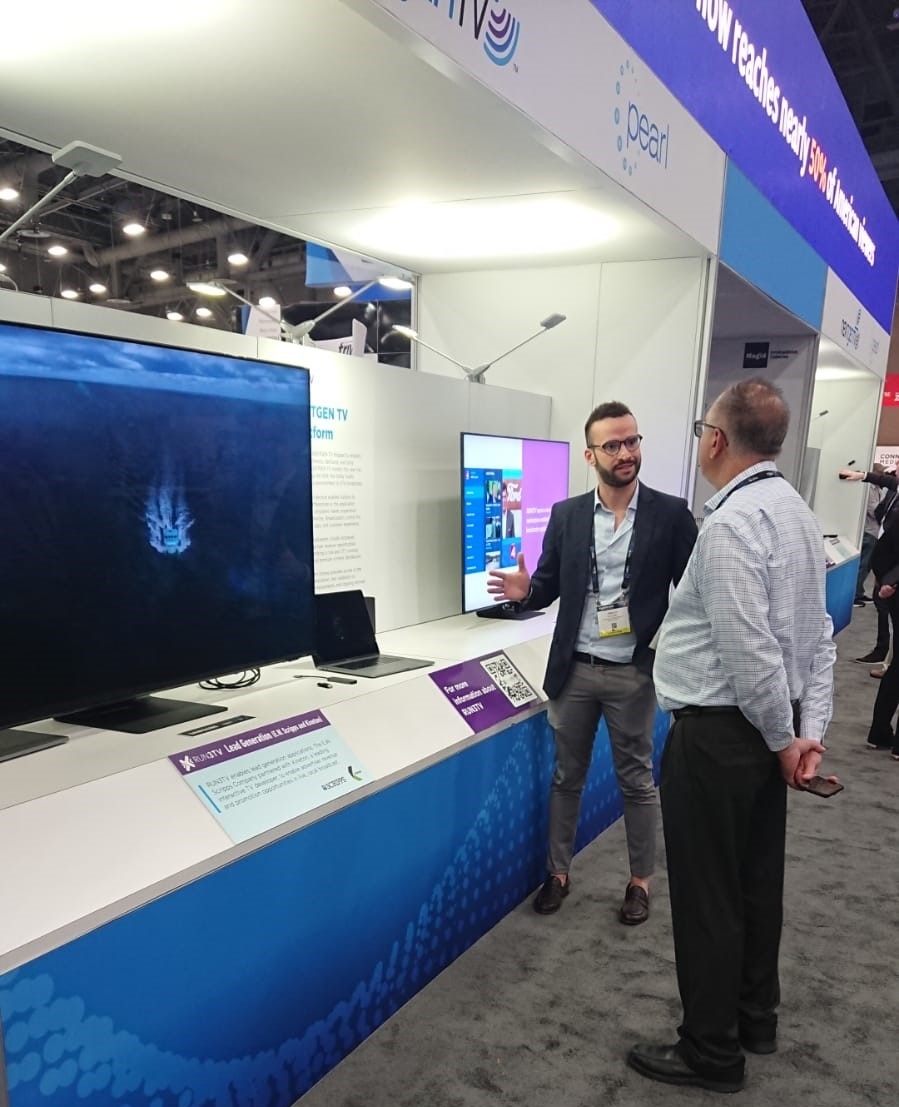 The NAB show is the main event organised every year by the National Association of Broadcasters in the USA.

Even if the attendance count was 50% lower than in 2019 (the last time it was held in person before the pandemic) and there were 41% fewer exhibitors than at the 2019 Las Vegas spring show.

However, the show showed its liveliness and the exuberance of the television industry in the face of major challenges.

In his welcome speech, NAB President and CEO Curtis LeGeyt highlighted the role of American local broadcasters in troubled times and outlined the four key points he seeks to address with US lawmakers, noting, as his primary concern, that local broadcasters lose around $ 2 billion annually when their content is accessible through Google and Facebook. He added that “Google and Facebook control 77% of locally focused digital advertising.”

LeGeyt’s second point was that lawmakers “must modernise media ownership laws to reflect market realities.” In translation, this could mean the regulation of powerful social media.

Third, LeGeyt said, the US communications regulatory agency, the FCC, should “reorient the way it thinks about broadcast policy more broadly,” since, he said, “the capability of broadcasters to function in the public interest is based on its economic feasibility “.

His final point was to solicit Congressional support for the Local Radio Freedom Act, which imposes new taxes on local radio stations.

Each offered opportunities for learning, discovery and engagement across the latest tools and advanced workflow options for content creation; next-generation technologies for creating new revenue streams; cloud computing and new media infrastructure; or all things data, AI and automation.

Several major international companies presented their most innovative devices for video capture of live broadcasts. The main topic at NAB was 8k transmission; among the most interesting in this area was Canon, which presented a device for live productions capable of capturing audio and images at 8k: EOS r5c. Equipped with real-time stabilisation and fish eye VR compatibility, the device is able to capture 4k images at 180 degrees and edit them using special software. At this year’s fair, several manufacturers focused on the production of augmented content through virtual reality. One of these was AOTO which, in partnership with MoSys, presented led screens with the industry’s best scanning speed with a very high refresh rate. On the other hand, Mo-Sys is a leading innovator and producer of virtual production technology that provides led content and the star tracker camera and lens tracking system. Arizo studio is a real-time broadcast graphics technology company providing the on-air graphics capabilities and the integration with the Mo-Sys led content server: thanks to this technology, it is possible to create virtual content through the LED virtual production instead of adding the graphics without adding them directly into the broadcast. New LED technology seen at NAB, such as Sony‘s, made it clear that virtual production will be more accessible to all and will provide a whole new way of handling productions. 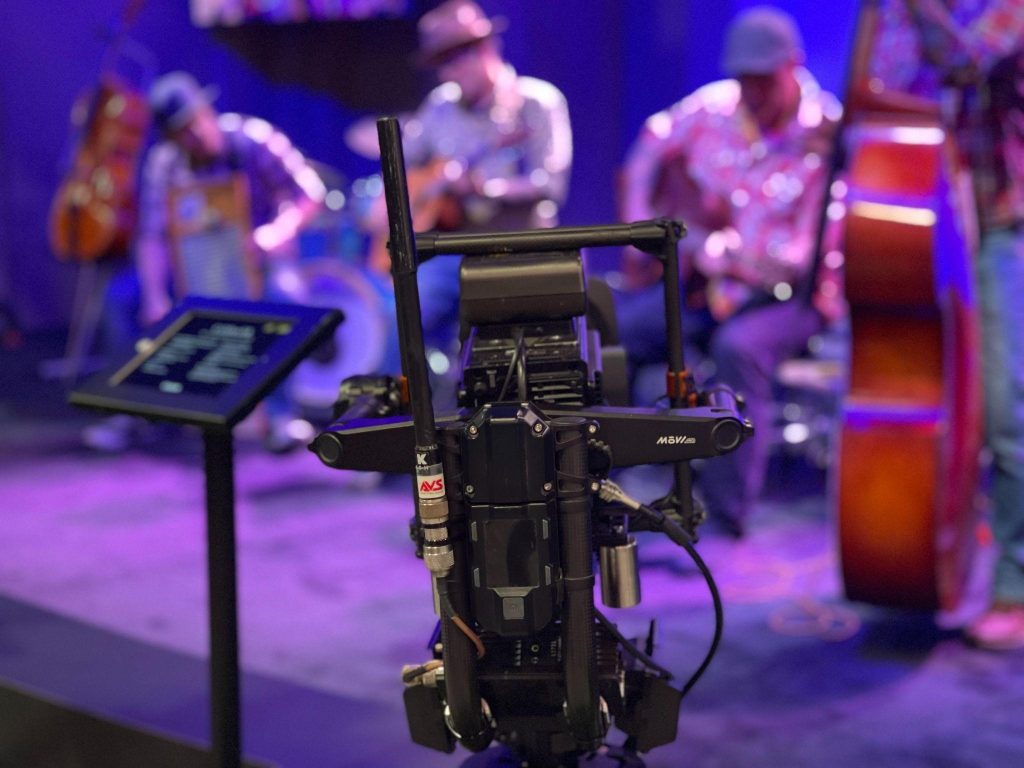 There was a relevant presence of companies offering tools and solutions for the creation of 3D content or for integrating AR solutions into the broadcast, like how to create a virtual studio for a sports programme and showing how to move assets on the screen with simple gestures of the presenter, enriching the user experience.

The North Hall was the place to explore content distribution and delivery, especially for cloud computing. The largest stands were those presented by Amazon and Blackmagic cloud. The former presented, together with AWS partners, various solutions in the Media/Entertainment area: from content production to Direct-to-Consumer Streaming and Data Science & Analytics. Highlights included Arch Studio, with which you can instantly create cloud-based digital content for special effects, post-production, virtual production and other collaborative creative activities. Through a dashboard offered as SaaS, productions and archiving can be created and managed, and users and teams can manage authorisations for facilities and projects. 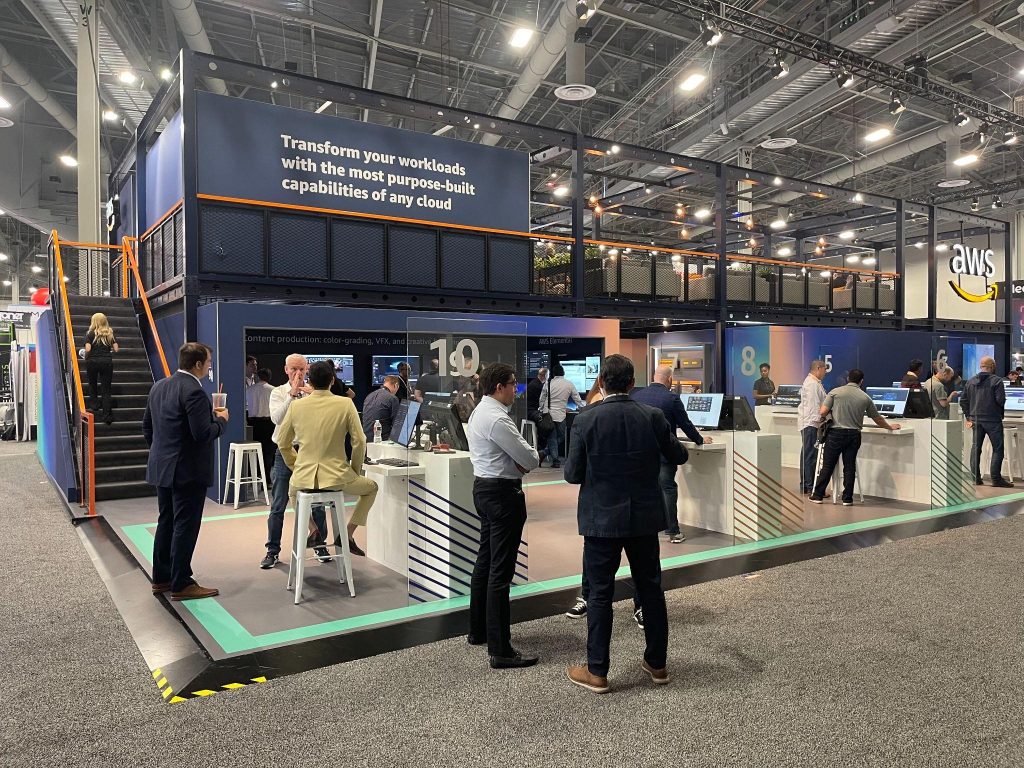 The North and West Hall housed the stands of companies offering solutions for monetising content through next-generation revenue-generating technologies. Among them was Ateme, an international leader in video compression and distribution solutions that help increase audience and subscriber engagement through their services. One of the main monetization services was DAI, which stands for Dynamic Ad Insertion. DAI is a technology that allows advertising to be inserted into video streams by operating both server-side (SSAI, i.e. server-side DAI) and client-side. DAI is the major tool for targeted advertisements through the collection of information about geolocation, the device used and the content accessed. Ateme developed a solution for OTT devices and also for HbbTV. Fraunhofer, a German organisation comprising 60 institutes of applied science, also presented its solution for both client-side and server-side DAI. Among the most interesting stands was the one dedicated to NextGen TV; this technology allows TV broadcasters to provide interactivity; all broadcasts can be ‘augmented’ with new content and information that can be consumed by the user at any time. For the viewer, this translates into a more engaging and interactive way of consuming breaking news, sports content, reality shows, or information from the web. In this new way of watching TV, there is also the opportunity for broadcasters to monetise through the use of advertising systems visible on users’ devices.

Kineton has been present at the booth of ATSC, the association that delivers the standards for digital television transmission over terrestrial, cable and satellite networks, enabling interoperability with the latest standard ATSC 3.0, at the base of the newest “NEXTGEN TV”. 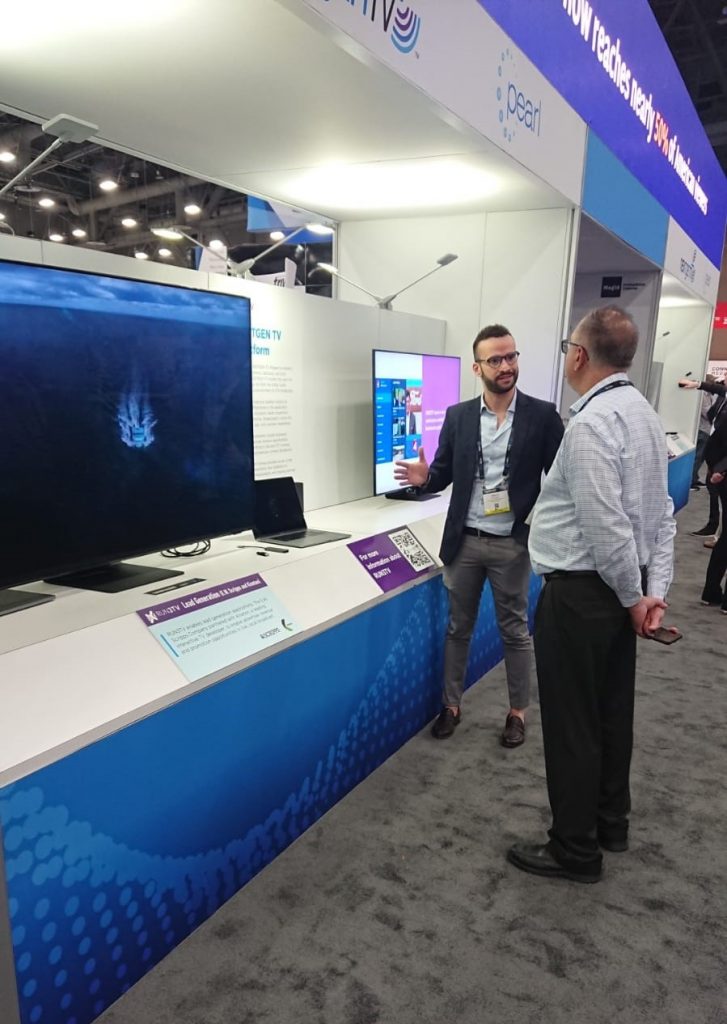 Kineton presented its product KARP, which is integrated into the RUN3TV framework developed by Yotta Media Labs, and also fits into this landscape, and presents its new functionalities with its enhanced version. In addition to an updated graphic theme and a new logo, new creatives have been added, expanding the offer that the broadcaster can provide to the viewer. The main creative ones are the interactives, through which it is possible to create interactive sites that display dynamic advertisements that show information retrieved from web services and that can be accessed via the remote control. Imagine wanting to consult real-time exit polls of political elections, or wanting to show an RSS news feed that has the latest news: through these new creatives, everything becomes possible. There was interest in KARP, since in the USA free to air market there are no interactive applications available, so this was perceived as a service to enable new revenue streams for the Broadcasters.

The demand for content across all platforms has exploded, and the only way for providers to keep up is to automate their workflows as much as possible. For faster content processing, AI and machine learning tools are now capable of analysing content for specific information that can be used to create metadata and guide their operations, both automated and manual. To be noted the platform Think 360 presented by Think Analytics. 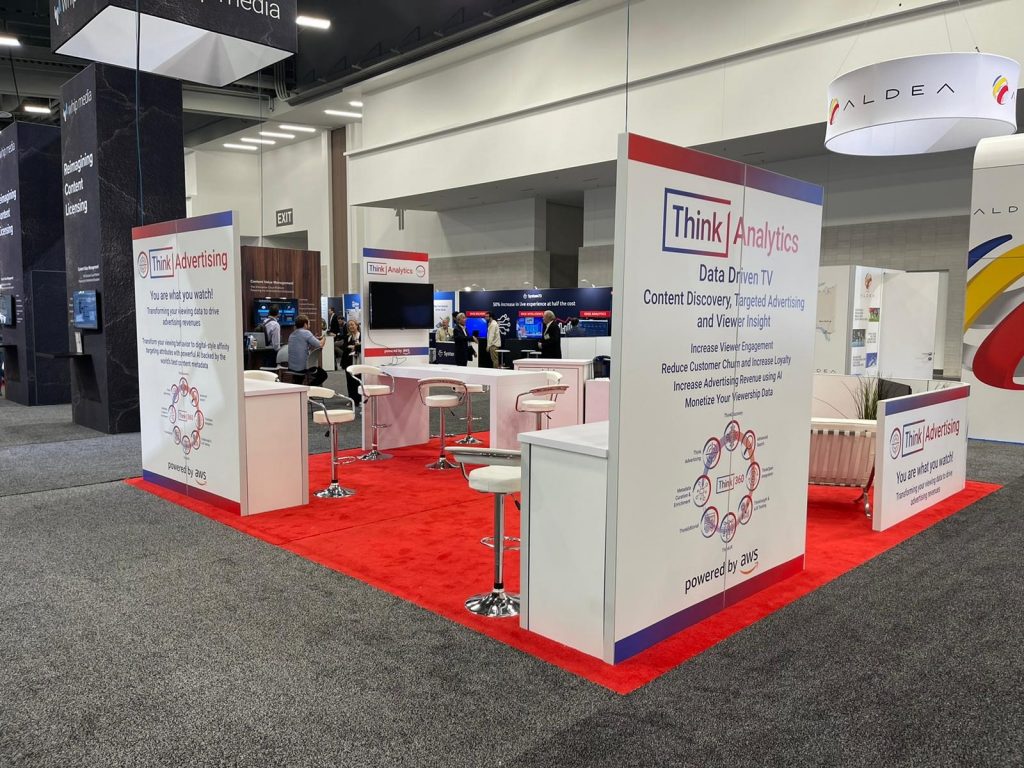 It was the most complete solution, this platform is modular and helps the broadcasters in engaging customers while measuring the consumption in order to increase loyalty and reduce churn. The platform covers the whole content lifecycle, from metadata enhancement to targeted advertising. It integrates solutions for supporting UX design and AI.

The impression is that there is a growing demand for this type of solution.